The Golden History Museum & Park’s collection holds little relating directly to Golden’s time as the Territorial Capital (1862-1867), or so I thought. Since we have been working on the Legacy Collection Inventory Project recently, we were excited to discover two original records from this era:

• A complete record of the Second Session (1862) of the Legislative Assembly.
Golden City was designated the capital of Colorado Territory on August 4, 1862, during the Second Session which convened in Colorado City (Golden was the second territorial capital).

• Private Acts, Joint Resolutions, and Memorials passed at the Seventh Session of the Legislative Assembly.
It met briefly in Golden in December, 1867, the last year Golden held the distinction as capital. 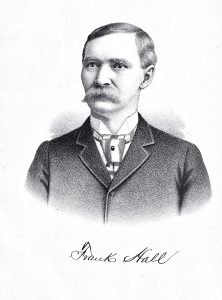 These primary source documents are fascinating to browse, but take a little work to unpack. Filled with general legislative housekeeping and territorial business, I particularly like the State of the Union-styled message delivered by Frank Hall, Secretary and Acting Governor (Hall will go on to write a comprehensive, four volume history of Colorado in 1889). His snapshot of territorial happenings covers a wide range of topics like mining, railroad building, Indian “concerns,” and even territorial participation in the Universal Exposition in Paris.

Here’s a direct link to the 7th Session-the last held in Golden City.

You can even see the real things by appointment since the library is open to the public. Plan your visit here. Maybe I’ll see you there.

Putting the documents in context 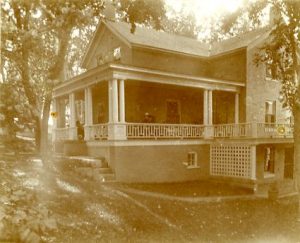 Governor Cummings worked out of this home at 814 14th Street in Golden. It was demolished in 1994.

Golden City held the title of Colorado Territorial Capital for five years, although mostly in name only. Except for the Sixth Session, which convened in Golden for a couple weeks, little actually happened here, and more often than not lawmakers met and quickly adjourned to Denver. Territorial Governor Alexander Cummings echoed the fact on December 16, 1866, saying, “The law locating the Seat of Government at Golden City, although passed four years ago, has been, practically, a dead letter.” While in office, Cummings was the only executive to locate his office in Golden. Noteworthy legislation passed during the sixth session included the elimination of voting rights for adult African-American and mulatto men.

The Seventh Legislative Assembly reconvened in 1867 on the second floor of the Loveland Building (Old Capital Grill & Smokehouse today). Frank Hall, Secretary and Acting Territorial Governor presided. In his history, Hall would summarize the events of December 2, 1867, “… a bill was introduced providing for the transfer, upon the condition that the citizens of Denver should provide a suitable site and deed the same to the Territory free of charge. (William) Loveland who had been the controlling spirit of the place from its foundation, mustered his friends and girded his loins for a long and bitter fight. Denver responded with a powerful lobby, fortified with material inducements. After several days of hot discussion, the bill passed and was approved, whereupon the Legislature adjourned to meet in the new capital the following day.”

Territorial officials adjourned on December 9, 1867, for good, permanently relocating the seat of government to Denver.

See other related artifacts from the online collection or a short presentation on Golden’s role in Territorial politics by Paul Haseman here.