Top 10 Artifact Donations for 2013 (from largest to smallest)

Golden History Museums accepted over 50 artifact donations in 2013. Many of the new acquisitions were specifically acquired for Made in Golden, Where Innovation Lives, the newest exhibit at the Golden History Center. But due to limited space not everything can be exhibited. Other items are cataloged and then go into storage for future research and exhibits. Below are 10 highlights from largest to smallest. (All images from Golden History Museums, City of Golden Collection.) 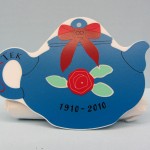 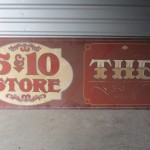 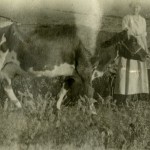 Lu Lu Ethel Easmond standing with a dairy cow on her family’s farm in Golden. 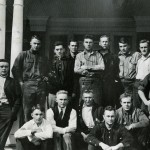 The men of Sigma Alpha Epsilon House at CSM. 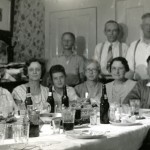 2. A 1951 Philco cabinet TV and phonograph – Donated by the Herron family, it was possibly purchased locally from either Meyer Hardware or Golden Furniture.

3. CoorsTek holiday anniversary ornament – Holiday ornaments were given to CoorsTek employees in celebration of their 100th anniversary in 2010. (image above)

4. Copy of a Burgess & Murphey’s 1881 city directory- Includes an alphabetical listing of all Golden residents as well as business advertisements, such as W. Dougherty’s dry goods, grocery, and hardware. Apparently he was a dealer of Merchant’s gargling oil and worm tablets.

5. Nicholas Koenig’s personal leather wallet embossed with decorative letters that read, “The Woods- Rubey National Bank of Golden.” Nick was one of the bank’s directors and even served as mayor, but is most often remembered as the owner of Koenig’s Mercantile.

6. Four different menus from the LaRay Hotel – Before Table Mountain Inn and the Holland House existed there was the LaRay Hotel. Just like the others, the LaRay offered accommodations and operated a fine dining room. Their $1.35 dinner special came with your choice of filet mignon or grilled lamb chop.

7. Assortment of letterhead and statements from Golden businesses operating in the 1940s and 1950s – Of special interest is letterhead from the Baxley Hospital and Clinic once located at 815 12th St., and another from the Jefferson County Republican (one of Golden’s other early newspapers).

8. A photograph of Lu Lu Ethel Easmond standing with a dairy cow on her family’s farm in Golden – When not working the farm she worked as the house mother for Sigma Alpha Epsilon House at the Colorado School of Mines. (images above)

9. A photograph of 12 members of the Koenig family gathered around their dining room table – There are even bottles of Coors beer on the table. It must have been a party. (image above)

10. A real photo postcard of riders posed on donkeys under the summit of Castle Rock – The following is written on the back: “Castle Rock Resort at Golden, affords visitors to Denver one of the most novel and sightly foot hill trips.”

The museum is always looking for interesting items. Of special interest are items from the Duvall-Davison Lumber Company and Baxley Hospital and Clinic. If you have an item or story to share contact Mark Dodge, Curator, at 303-277-8714 or mdodge@cityofgolden.net.

This article originally appeared in the Golden Informer.