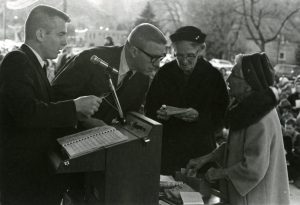 Sorting through contents of the 1918 time capsule during the Golden Liberty Bell 50th anniversary celebration held November 11, 1968. Items included World War I victory buttons, coins, photos, and even some dust from 1918 (according to newspaper accounts).

Time capsules are great for inspiring an interest in history and civic pride. Unfortunately, their contents are generally underwhelming and obsolete junk (excluding Golden’s, of course).

Merriam-Webster defines a time capsule as a container holding historical records or objects representative of current culture deposited for preservation until discovery by some future age. Basically, communities gather and store a collection of items with a specific plan to revisit the stuff sometime in the future—100-year time capsules tend to be the most popular.

Time capsule enthusiasts (yes, they exist), agree they must meet the following criteria:

Even though they are an international practice, they tend to be more of a phenomenon in the United States. Many consider the Centennial Safe, exhibited at the 1876 Centennial Exhibition in Philadelphia to be America’s first. At the time it was called a safe because the term time capsule did not yet exist. The term “time capsule” would be coined in 1938 at the New York World’s Fair. President Ford opened the Centennial Safe in 1976 at the U. S. Capitol in Washington, D. C. 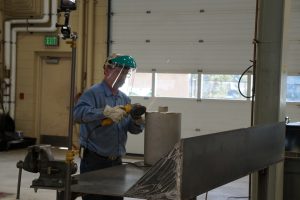 On November 2, Eric Casey, a 20-year city employee, had the honor of opening the stainless steel time capsule at the city shops. Cylindrical, like a large piece of pipe, the custom container was fabricated at the Coors Brewery. Eric used a hand-held grinder to cut the weld joint holding the top of the cylinder together. After 25 minutes and a whack with a hammer, the 50-year capsule popped open.

I was the lucky one to carefully unpack the contents, and I must say, it was cooler than I thought it would be. There was way more material than anticipated and everything was in pristine condition. One of my favorite items so far is a scroll with a short inscription written by Conrad Gardner of the Golden Jaycees. The scroll includes signatures from Colorado Governor John Love, Golden Mayor Charles L. Goudge, and dozens of Golden citizens. The story goes, to help defray expenses signers were asked to pay 50 cents each, or essentially one penny per year. Golden school children were invited to sign two other scrolls free of charge.

Every time I look at the scroll, I discover a new and interesting signature. One group of signatures represents a contingent from Coors, including,  A. Coors (Adolph Coors Jr.), while another includes descendants of Thomas L. Golden (Golden’s namesake). Come and see for yourself.

We’re working on a complete inventory and are still cataloging the contents, but selected items will be on view at the museum until the end of April.

The International Time Capsule Society was founded in the 1990 to promote the careful study of time capsules. And, there are even a few books on the subject. This title stood out to me:  Time Capsules: A Cultural History by William E. Jarvis.