History is a broad topic that is often misconstrued to only include the time of written stories. But, in fact, history also encompasses the era before written language. This time is often referred to as prehistory. As the Golden History Museum & Park tends to focus on the 1800s to present day, it is a real treat for museum staff and volunteers to explore Golden’s prehistory era, which is why our visit to Dinosaur Ridge was so exciting!

The earth has gone through extreme environmental shifts for millions of years. As such, many don’t realize that Golden was actually a coastal beach 100 million years ago. Evidence of the coastline can be seen in numerous points along Dinosaur Ridge as there are ripple marks throughout the rock formations. Additionally, Dinosaur Ridge’s famous dinosaur tracks are further proof of Colorado’s vastly different climate millions of years ago. When the dinosaurs roamed this area, they were walking on sand near the coastline–thus the tracks we see today are actually solidified in…you guessed it, sandstone! Within these tracks, some scientists hypothesize you can see evidence of two dinosaurs fighting possibly to protect their young. But, perhaps one of the most fascinating aspects to Dinosaur Ridge is discovering the dinosaur bones scattered throughout the formations. While many can see fully excavated dinosaur bones within museums, I find it rather rare and exciting to view bones exposed within their original resting places. 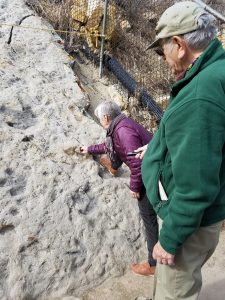 Dinosaur Ridge offers an incredibly unique experience that is filled with insightful evidence that highlights Golden’s past. Huge thank you to Barbara Farley for organizing our group tour and to our tour guide extraordinaire, Norb!