What’s in a Name?

The Imperial has a nice ring to it-sounds like a classy and elegant sort of place to spend a night. It turns out that our beloved Astor House once operated as the Imperial, sometime around 1913, at least. While studying a few old photos of the Blizzard of 1913, I stumbled upon a shot of 12th St. with the Astor House building in the background. The eastern end of the building is clearly marked with a sign that says The Imperial. If you study the photo you may be able to see it for yourself. 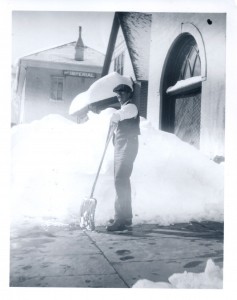 This is a great discovery because, now, armed with another name for our establishment at 822 12th street, we have the ability to research other primary source materials for specific citations or references to the Imperial. After a preliminary search through some early issues of the Colorado Transcript, we found several advertisements. One from 1917 says:

Nicely furnished room for rent at The Imperial, corner Twelfth and Arapahoe.

So, to answer the question, what’s in a name? A lot. For now, we’ll add The Imperial to our growing list of others (Lake House,  Castle Rock House, Boston House, and Marshall House) for the stone building at 822 12th St.