When the circus walked to Golden

Home » Collections and Exhibits » When the circus walked to Golden

When the Circus Walked to Denver and then Golden

I love the circus, and years ago, I found this story by Bernard Kelly in a box of donated papers. Originally published in the Denver Post‘s “Empire Magazine” on June 29, 1969, it chronicles the first circus to visit the Colorado Territory via the “new” transcontinental railroad that carried them as far as Cheyenne, Wyoming. They mostly walked the rest of the way. This same circus would grow into the world-famous Barnum and Bailey Circus. Enjoy!

And Denver was a scrawny frontier town 110 miles from that railroad, which came no closer than Cheyenne, Wyoming.

There was only one way for the circus to get to Denver – walk. That is, the sturdy horses walked, pulling tent and accommodation wagons, the cages of wild animals, and everything else necessary to put on the show.

After three days in Denver, there was a harder, steeper walk ahead – an uphill journey to Golden, Central City and Georgetown, followed by a downhill walk to Boulder. Then another journey back to Cheyenne and the eight-car special train. It took real troupers to travel with a circus in those days.

For a week in advance of its scheduled Denver appearances – June 4, 5 and 6 – the Castello show had a two-column ad from top to bottom of page 1 of the Rocky Mountain News. It was an adjective-studded proclamation of the circus’ wonders.

“Never before in the history of amusement (said the ad) has any enterprise of a similar character been inaugurated on so vast and grand a scale as the present Combination, nor has there ever been before offered for public appreciation and patronage such a varied exposition of AMUSEMENT AND PLEASURE, combined with instruction.”

Dan Castello of Racine, Wis., was a talented clown, and also one of the most astute and successful circus operators in the business, and he had two good partners, James M. Nixon and Egbert C. Howes. 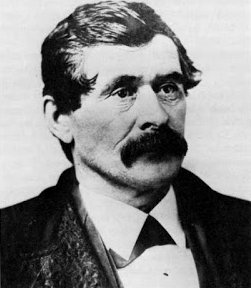 Their circus gave its first performance in Frederick, Md., on April 13, 1868, and started across the country. They had a good tour of the Midwest, South and Southwest. All the while the partners had been keeping a close watch on the dramatic race of the U.P. and C.P. to bring their rails to a meeting. This finally occurred May 10, 1869, at Promontory, Utah.

The idea of being the first circus to cross the country, using the new railway over the Rockies, fascinated these showmen. But they must have had some fears. Indians had killed train and construction crews. And who could tell how a circus would be received in frontier towns where a circus had never played before? There was only one way to find out.

The trip out of Omaha, Neb., began May 27. The circus was in Grand Island May 28 and North Platte May 29. Neither town had more than a few hundred residents and there must have been many vacant seats.

Cheyenne was booked for May 31 and June 1. The Cheyenne Daily Leader was expectant:

“If the weather isn’t too unpropitious, a grand street cavalcade will be indulged in on Monday afternoon, and we are led to expect such a display of fine horses and graceful riders as will set our young heads to growing dizzily.”

Equipped with horses and wagons to go where the railway did not go, the circus started out from Cheyenne along the rough stage road to Denver.

It rained. The storm turned what was ordinarily a bad road into a quagmire. Wagons tipped and slid and stuck in mudholes. The two marching elephants, Jenny Lind and Hop o’ My Thumb, had to content with unaccustomed cold and treacherous footing.

Stops were made and performances given at La Porte on June 2 and Burlington June 3. This was not the present day Burlington in Kit Carson County, but a settlement near what is now Longmont.

June 4 came and there was no sign of the circus in Denver. An item in the News explained:

“The Great Show which was to have opened here this afternoon has not yet arrived. The caravan was five miles this side of Burlington at daylight this morning. The rain, darkness and exceedingly muddy roads have delayed the arrival.”

The News went on to explain to readers that the circus and its performers were taking “a great risk in venturing as far from the railroad” as they had.

But the Great Show made it. The tent, described as the “Mammoth Pavilion, which covers one acre of ground and which will accommodate over 5,000 persons,” was pitched on the corner of 17th and Lawrence Streets, then the outskirts of town. 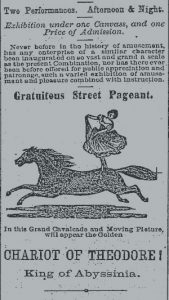 It was a good choice of dates. Much of Denver’s space was covered by the tents of Ute Indians who had come in for payment of their allowance by the government Indian agents.

A great throng turned out for the parade. The News reported: “We have never seen the streets of Denver so crowded.” The reporter added,

“The band chariot is a really magnificent affair and the band a very excellent one. It was followed by the equestrian performers in costume and the animal cages. The streets were full of people, not the least noticeable among whom were several hundreds of Indians, brilliant in fresh paint and savage finery.”

The Indians attended the circus in large numbers. They were described as taciturn and emotionless. One commented on seeing an elephant for the first time, that it would make “a great warhorse.”

The rain was not over. On Monday, June 7, the News reported:

“The terrific storm Saturday evening bid fair to prevent the circus performance. The lamps had been lighted and everything was ready to open when the wind came. To prevent disaster the canvas was lowered upon the center poles, and the rain which followed in torrents…poured into the pavilion. Many lamps were broken and all were extinguished…”

The rain lasted half an hour. Eventually, although the ring “was almost a mortar bed,” the show went on.

Average attendance for the four performances in Denver was estimated at from 1,500 to 1,800 a show. This was pretty good, considering that the town’s population was less than 5,000. Admission was $1.50 for an adult and $1 for a child, a stiff price when many men did a day’s work for less than a dollar.

Here in Denver a serious misfortune occurred. The smaller elephant, Hop o’ My Thumb, became ill. Whether it was the long and difficult walk from Cheyenne or the alkali in the water – both were blamed – no one could be sure.

Hop’s keeper took him to Luke DuBois’s stables for a rest and treatment, but Hop grew worse. When the time came to leave for the mountains, Hop was left behind. It was the last time the performers were to see him. He died June 9. There is no record of where poor Hop was buried. 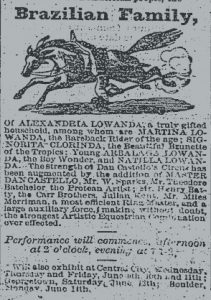 Meanwhile the circus played Golden June 8 and was booked in Central City June 9, 10 and 11. The Daily Central City Register had some misgivings.

“A doubt is expressed whether King Theodorus’ Chariot or the band wagon of the troupe can be brought into the mountains on account of the sharp turns on every hill.”

But they must have made it; the circus played its dates on time and to good crowds, moving to Georgetown June 12, playing a return engagement in Central City June 14, and two shows in Boulder June 15.

The circus got back to Cheyenne and resumed its trip. There were adventures ahead. A circus employee got drunk in Cheyenne, shot at a policeman who tried to arrest him, and escaped under a tent flap. Reports don’t say whether he was captured.