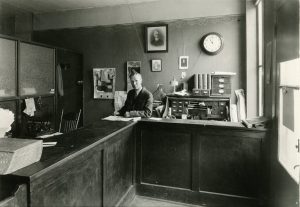 Newspapers once were the lifeblood of a community. Today they are a treasure trove of history for researchers and explorers alike.

The historic newspaper collection once maintained by the Golden branch of the Jefferson County Public Library was donated to GHM&P in 2015. Following that transfer, the museum forged a partnership with both the Jefferson County Archives and the Colorado State Library to work with the Colorado Historic Newspapers website to make the collection accessible to everyone. Over the last five years the priority has been the digitization of the second longest continuously published newspaper in the state: the Colorado Transcript. Online issues from December 1866 through 1984 are freely available.

Many other Jefferson County titles available

In addition to the Colorado Transcript and its other iterations, including Golden Transcript and Golden Daily Transcript, you’ll find digital copies of these Jefferson County newspapers:

Read on, knowing that digitization is a costly endeavor at about $1.00 per page. If you’d like to support this effort please let us know. It will likely cost another $50K to digitize the Golden Transcript up through 2000.

An article in the Golden Informer featured more of the digitization backstory.