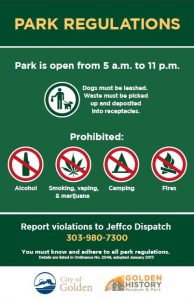 Golden History Park (formerly Clear Creek History Park) is home to many of the original buildings from the Pearce Ranch in Golden Gate Canyon. Thomas and Henrietta Pearce raised eight children on their ranch. It was one of the largest in the area by 1912.

Stroll around and imagine yourself growing potatoes or raising chickens as part of a homesteading family. Peek through the windows of real 1800s cabins and see other buildings from the ranch like the barn, chicken coop and two-seat outhouse.

The buildings are open periodically, such as during Homestead Open House in the summer, with the help of our volunteers. Volunteers serve as interpreters within the historic structures to answer any questions and guide your experience. Check out our events schedule here.

Thank you to our sponsor, The Golden Group, for underwriting the History Park Walking Guides. These brochures share the stories of the historic structures and give detailed information about the park’s creation. They are free and available at three entrances. Donations to offset printing and production costs are accepted and greatly appreciated. 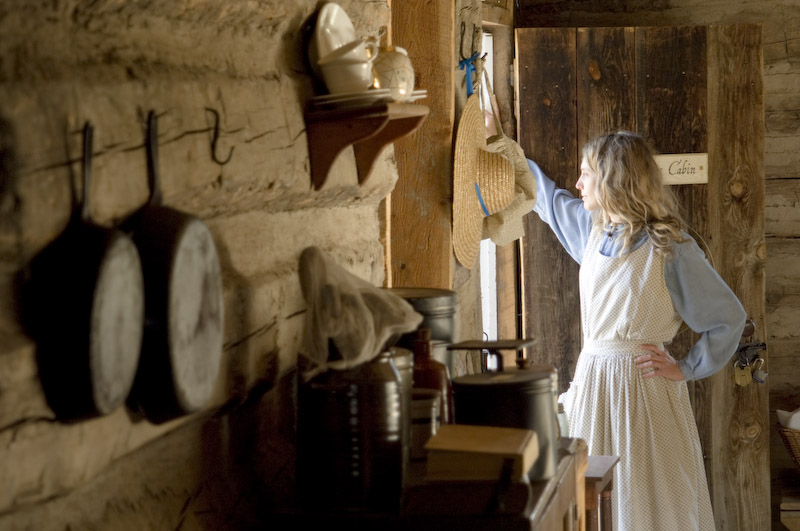 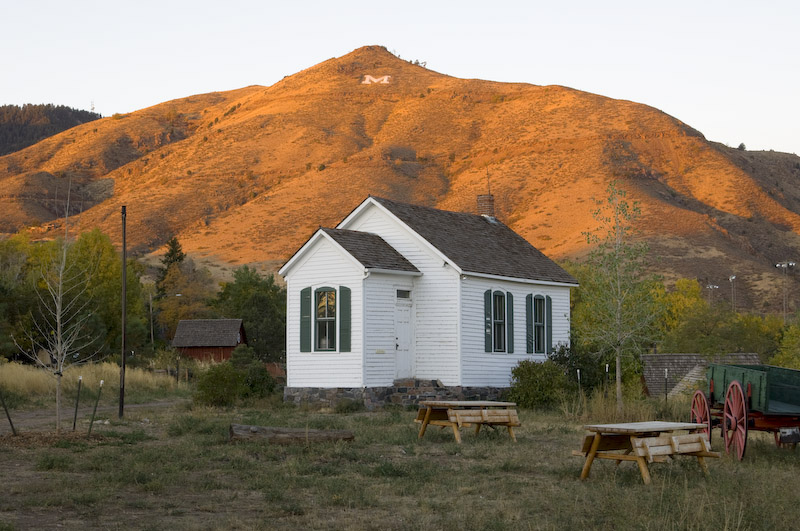 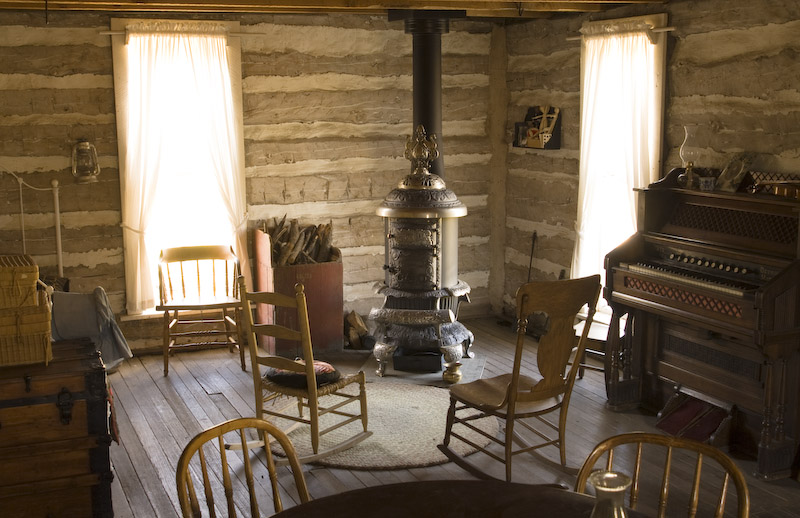 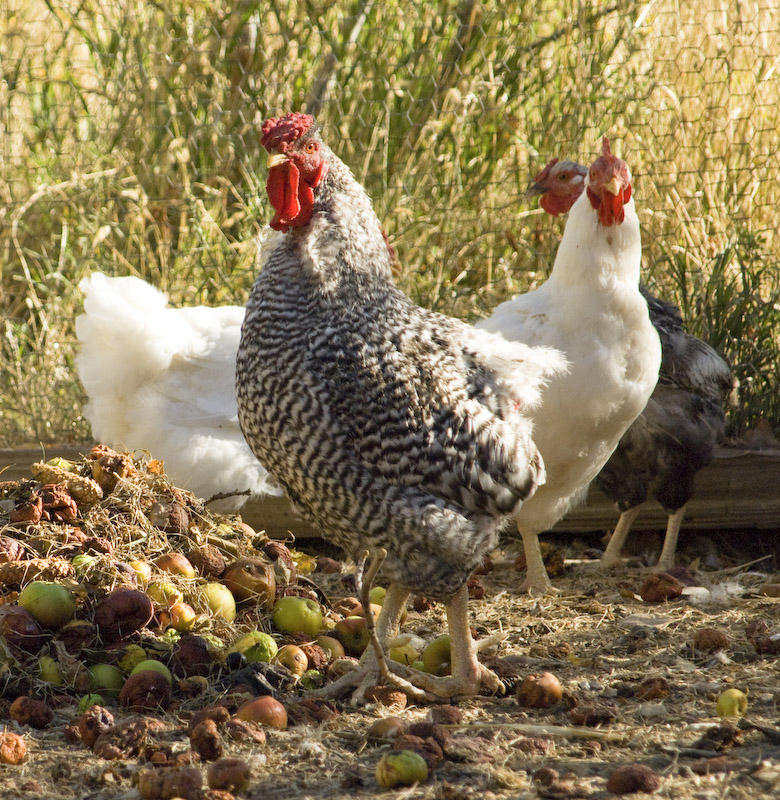 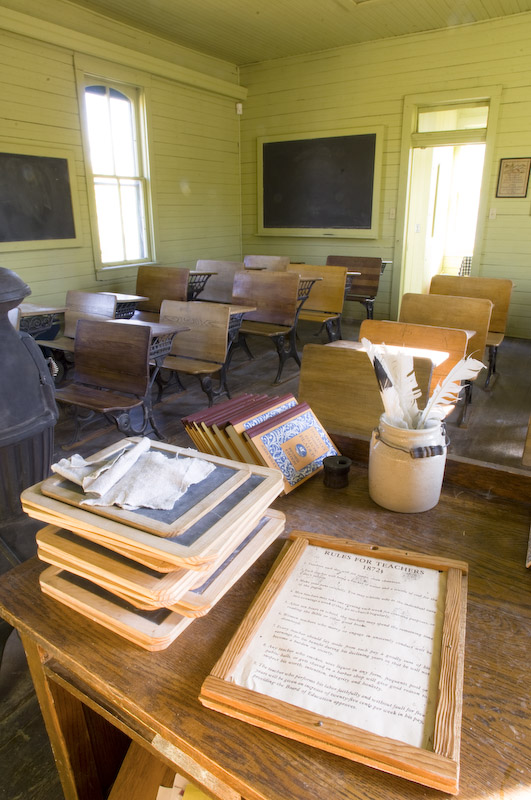 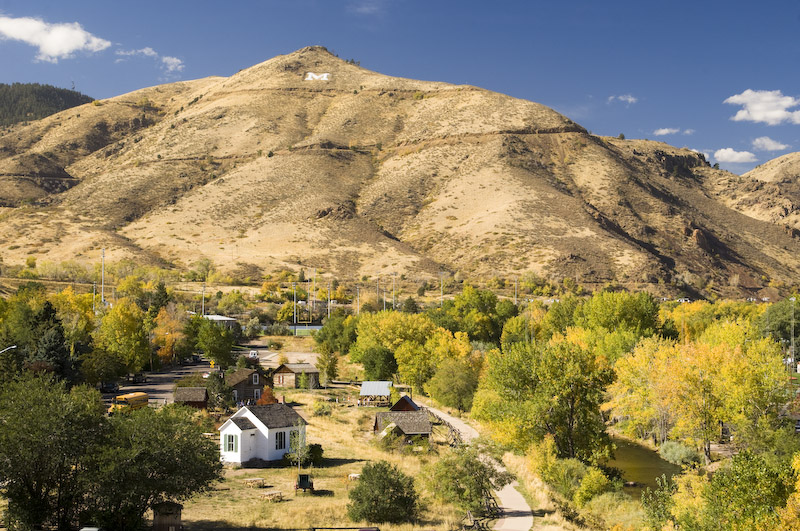 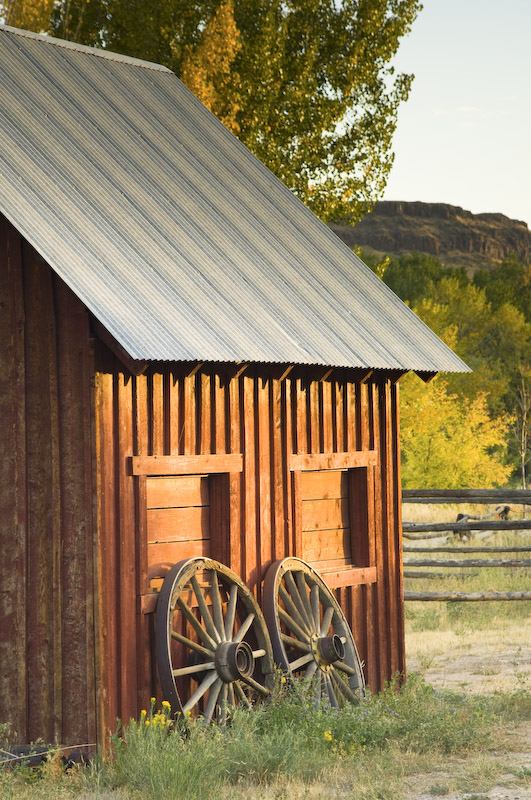 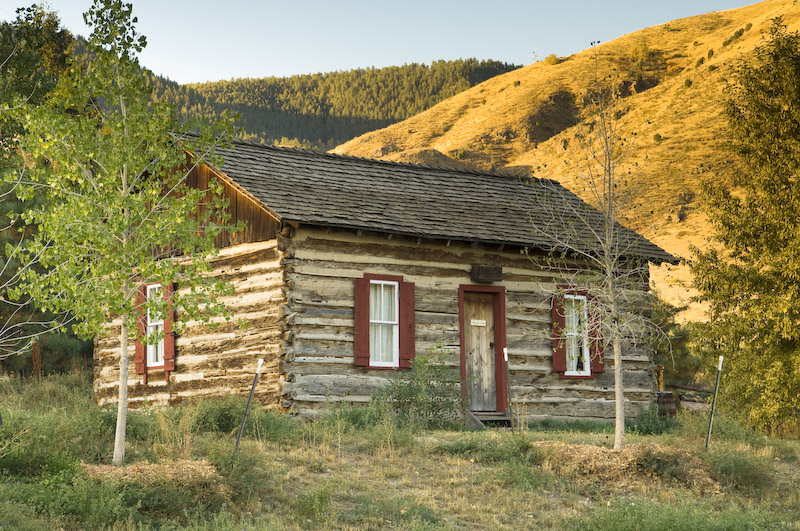 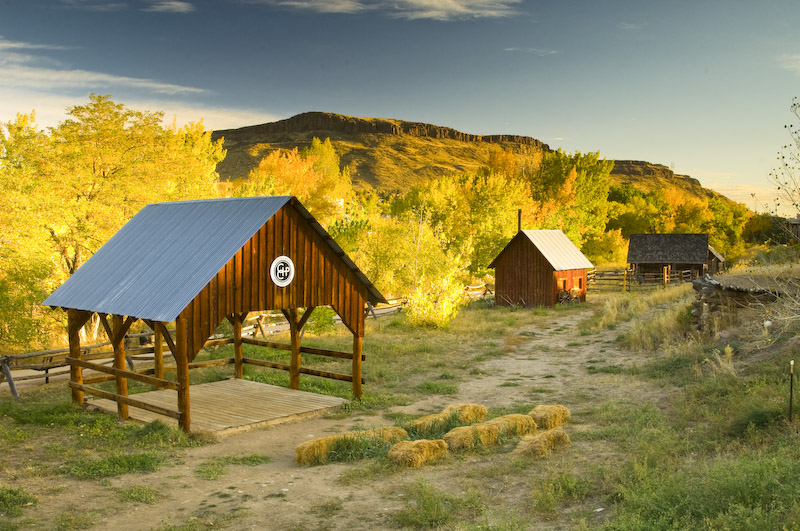 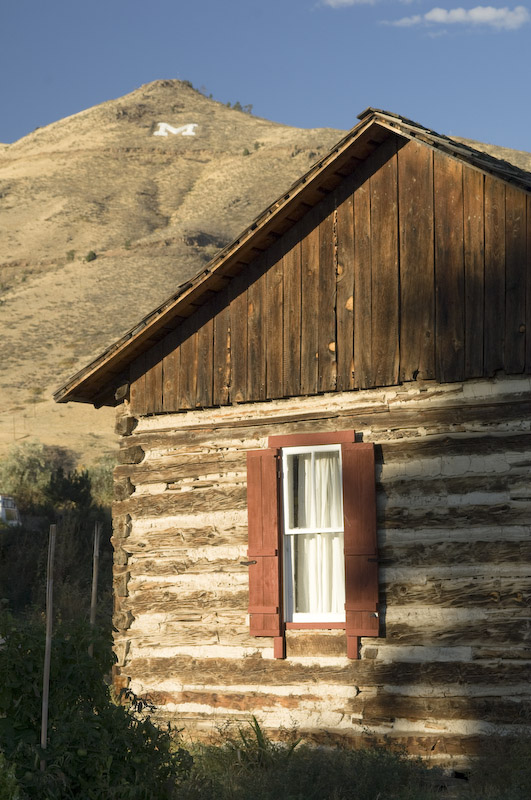 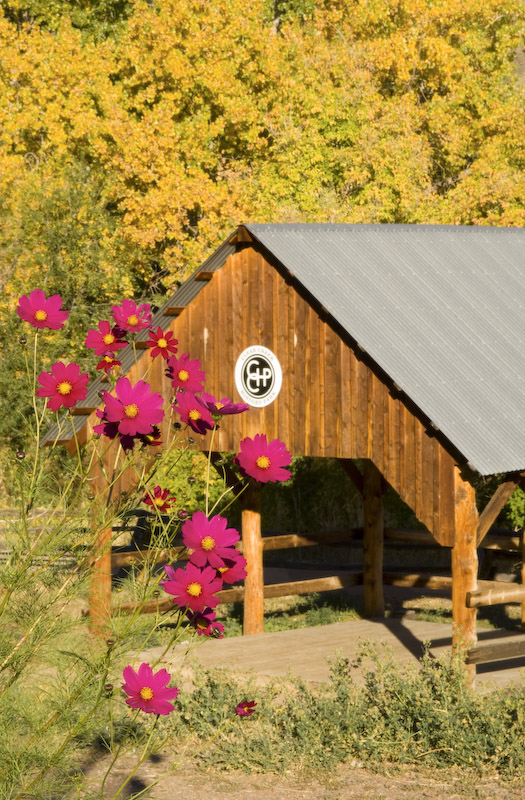 The Park is ideally located along Clear Creek in downtown Golden. Our outdoor setting re-creates the look and feel of a late 1800s mountain ranch complete with gardens, a working blacksmith shop, schoolhouse and chicken coop (chickens included). 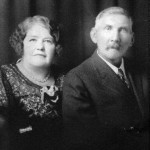 The History Park is home to many of the original buildings from the old Pearce Ranch in Golden Gate Canyon (about fifteen miles away as the crow flies). When a housing development threatened the ranch buildings in the early 1990s, the community rallied together to save this piece of Golden’s history. Beginning in 1994, the buildings were moved to Golden, log by log, where they were lovingly reconstructed over the course of four years. The Park opened its gates to visitors in the spring of 1999. Since then, we’ve invited thousands to take a fresh look at the frontier. 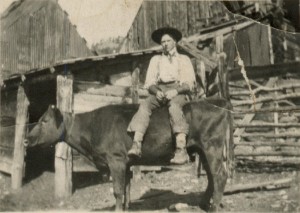 From humble beginnings, the Pearce Ranch grew to become one of the largest in the canyon by 1912. While building his first cabin, Thomas Pearce lived in a dugout or a rough shelter formed by digging into the side of a hill. Like many settlers in the area, he was a hard rock miner who hailed from Cornwall, England. At the age of 19, he moved to Colorado with hopes for a better life. Arriving in 1878, he quickly found work in the gold and silver mines of Central City and Black Hawk, including the famous Bobtail Gold Mine.

In 1900, he homesteaded a beautiful valley between Central City and Golden. Thomas and his second wife, Henrietta, raised eight children on their mountain ranch—that’s right, eight, all of whom were born at home. They were a hard-working bunch. When not toiling in the mines Pearce was farming and ranching. The family grew vegetables that thrived in the foothills like potatoes, carrots and peas, and they raised cattle, chickens and hogs. Everything extra they grew and raised was sold in the surrounding towns. 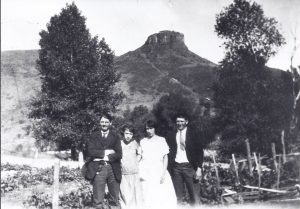 In failing health and nearly blind from a mining accident, Thomas Pearce turned the ranch over to his sons William John (pictured above goofing on the back of a cow) and Tom Jr. in the late 1920s and moved into Golden. The sons followed in the footsteps of their father, continuing to ranch together while raising their own families. More than 100 years later, members of the Pearce family still ranch in Golden Gate Canyon.

Even though many of these buildings were numbered, dismantled, moved, and then reconstructed onsite—sort of like a giant jigsaw puzzle—you’d never know it today. The History Park looks and feels like it was always here. A visit will take you back to a time when people, not so different from us, worked and played in the frontier towns of Colorado.

You’ll want to be sure to see the following buildings: 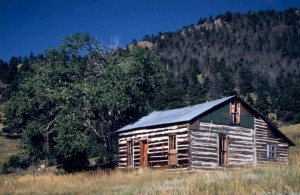 This baby is the real thing—all original, it dates to at least 1878. Five different families called this place home before it was purchased by the Pearce family in 1919. William John and Susie Pearce raised their four children here beginning in the early 1920s or early 1930s. It’s rather large for the times with a sizeable addition for a kitchen and pantry and a big loft for storage and sleeping.

You can see the pride the builder took in his work in the hand-tooled craftsmanship used to construct this cabin, especially in the distinctive dovetail notching on the corners. Inside the Pearce cabin is outfitted with period furnishings like a coffee grinder, a bathtub, a bootjack and a pump organ. There’s even a real working cook stove in the kitchen that turns out some tasty biscuits. 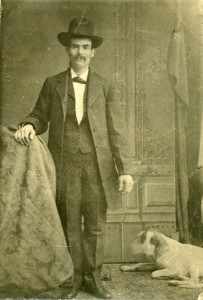 This cabin, dating to around 1873, is the oldest structure in the park. Annie Phillips lived there with her first husband, John Harry (or Harrey), and later with her second husband, Adam Reynolds (a miner who died from black lung). Between them they had four daughters: Henrietta, Mary, Gertrude, and Elizabeth.

It was situated on a 240-acre ranch adjacent to the Pearce Ranch. Henrietta Harry, one of John and Annie’s daughters, became the second wife of Tom Pearce Sr. By 1912, the Reynolds ranch had grown to 1,180 acres and the Pearces purchased the ranch from Annie Reynolds’ estate for $5,000. Today we hold education programs here, most notably our summer camp for kids.

This is an original two-seater from the Pearce Ranch.

Listen hard and you may hear the ringing of metal upon metal, especially if our resident blacksmith is around. Most farmers and ranchers had small shops for repairing tools and farm equipment. Blacksmiths were jacks of all trades with all things metal and a welcome addition to any frontier community. Our shop holds all of the tools needed for metal work including a forge, blower and anvil. Our blacksmith shop or smithy was built onsite using a style of construction common in the late 1800s.

Everyone loves the chickens; we’re sure you will too. Our one-hundred-year-old coop is home to various (historic) heritage chicken breeds. Chickens were common livestock kept by pioneers for meat, eggs, feathers and manure. Check out their beautiful plumage and watch the birds taking their afternoon dust baths to clean their feathers. 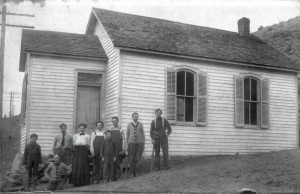 Moved here from Golden Gate Canyon, this original one-room schoolhouse was built around 1876, the same year Colorado became a state. It served the needs of canyon locals until 1951. In addition to schooling children in grades one through eight, it was also a community center of sorts where dances and church services were held.

It was moved to Golden as a 1976 Colorado Centennial project sponsored by Mitchell Elementary faculty and students.

Even though our honey bees may not be as loveable as our chickens, they’re crucial to the success of our gardens, and yours too. We also love the sweet honey we harvest from them after successful seasons. Our several Langstroth hives are each home to tens of thousands of bees. In the early spring, a hive will typically start out with 10,000 to 15,0000 bees, mostly workers (females), plus the Queen. In the peak season the number of bees in each hive can reach or exceed 40,000 bees, including drones, worker bees, and the Queen.

First carted to Colorado with the pioneers in 1862, worker bees have done their part to pollinate fruits and vegetables in our state ever since.

No homestead was complete without a root cellar, the frontier combination refrigerator and storeroom. Ours was built onsite by dedicated volunteers. Root cellars are the ideal place to store everything from pickles to potatoes since the temperature stays constant year round. We’re never sure what you’ll find in this one.

The Golden History Park celebrates the region’s agriculture heritage. Many of the farms and homesteads across the Golden area had large and productive orchards. In fact, Golden’s first permanent White settler, David Wall, earned a respectable living from growing and selling food to the hundreds of miners who flooded the region. To illuminate that history, GHM&P planted a new Heritage Apple Orchard in front of the Guy Hill Schoolhouse in the Park in 2021. The City of Golden Parks team prepared the new orchard space by amending the soil and laying drip irrigation. Then they planted more than a dozen apple trees donated by the Montezuma Orchard Rehabilitation Project. The trees come from varietals that have been documented to have grown in the area more than a century ago.

The roses that formerly surrounded the patio at Golden History Museum were transplanted to a new showcase garden in 2021. It is located just west of the Pearce Cabin in the center of Golden History Park.