Native American history and connections to the Clear Creek Valley and table lands of the central Colorado Front Range extend back more than 12,000 years. Contemporary Native American communities still view this place as an aboriginal homeland. However, today’s typical narrative of the region largely excludes Indigenous people and their values. To address this disparity, the City of Golden formed a partnership between its divisions of Museums and Planning, with the additional support of the Historic Preservation Board, to engage Native American tribes and ethnographic researchers to help tell the story. The study involved cultural advisors from six American Indian tribes and a review of relevant literature. Together, the oral historical and documentary records provide a robust narrative about Native American connections to Colorado’s Front Range and create a foundation for future collaborative research with tribal communities. 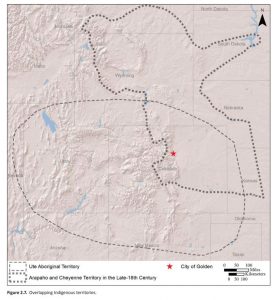 Situated within the ancestral territory of multiple tribes, the Clear Creek Valley is a place where multiple Indigenous ways of life were practiced. All of the components that make up this area—including viewsheds, night skies, soundscapes, trails, plants, animals, waterways, landforms, archaeological sites, and historical events—have value and significance to contemporary Native American people. Topography and habitats are some of the indicators of a homeland and cultural landscape to Indigenous people, as they provide physical and spiritual sustenance. The Golden area provides an access corridor between the Rocky Mountains and the Plains, and over 180 local plant species have documented Indigenous uses and names. These serve as a foundation for Native American connections to the area.

Tribal oral traditions and cultural activities continue to reinforce the long-standing connections tribes have to the region. In the oral histories of the Núuchiu (Ute), the area now called the City of Golden is located within the origin places of the Moghwachi̱, Tabeguache, and Uncompahgre bands and has been significant since time immemorial. The oral histories and documentary record of the Tsétsėhéstȧhese or Tsistsistas (Cheyenne) and Hinono’ei (Arapaho) reveal a history that began in the eighteenth century in the Front Range of Colorado. Painful tribal histories, including the forced removal of the Utes from a large portion of their ancestral lands, and the removal of the Cheyenne and Arapaho from Colorado following the Massacre at Sand Creek, are historically linked to the development of the City of Golden and are therefore essential components of Native American interpretation of the area. The City of Golden today recognizes that these oral traditions are an integral part of cultural identity and cannot be trivialized. 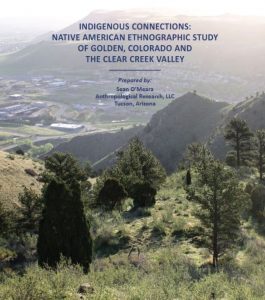 The brand-new publication Indigenous Connections: Native American Ethnographic Study of Golden, Colorado and the Clear Creek Valley (use the “Additional Media” link at the very bottom of the hyperlinked page to download the free PDF) is an educational resource that can be downloaded free from the Museum’s online collection website. This report is the very first step in cultivating strong relationships with local Indigenous communities. We hope that this educational resource will be used widely and that other communities and cultural institutions will embrace and build upon this work for the greater understanding of the Indigenous presence in our region. Together we can share resources, ideas, and networks to work collectively to lift Indigenous voices in our communities. Community members are also invited to respond to a short, four-question survey to help guide our future work and help us prioritize what projects and initiatives the Museum should undertake next in this journey.