The most famous landmark in Golden

Home » City of Golden » The most famous landmark in Golden

“No single project is more important to Golden than this arch…For Golden it will make a new face, a new spirit, and a new thinking.”

–Lu Holland speaking to the Golden Chamber of Commerce members.

It’s impossible to imagine Golden without its iconic welcome arch over Washington Avenue.

A relative newcomer to town, Lu Holland was civic-minded and wasted no time promoting his Holland House business and new hometown. He joined the Golden Chamber of Commerce and soon found himself in a leadership role as president, serving from 1948-1950. In 1949, Lu presented an aggressive agenda that included new four-lane highways serving Golden, a new courthouse, a new high school, teeming businesses, and a new neon welcome arch over Washington Avenue, most of which would eventually happen.

He envisioned big things for Golden. This meant standing up to big-city forces in Denver which were interested in annexing portions of Jefferson County. Golden is “Where the West Remains,” Mr. Holland declared, suggesting that all Jefferson County communities west of Denver should unite for their own benefit under the name of Golden. “To Denver we are serving notice to stay back of your line; expand to the Kansas border if you want, but we’ll take care of everything between here and the foothills,” he admonished.

A welcome arch over Washington Avenue was one of his first accomplishments despite less than enthusiastic support from Chamber members. Holland estimated it would cost roughly $5,000 and even donated the first $1,000. Ultimately, it cost $7,500, and the Hollands paid for most of it. You wouldn’t know it today, but it was somewhat controversial at the time. Today it endures as one of Golden’s most iconic and beloved landmarks.

Greg Holland, Lu’s grandson, shared this with GHM&P in 2019:

My grandfather, “Lu” Holland, was a young cowboy when he first came to Colorado.  His specialty was breaking horses.  He would hire on with an outfit or a ranch and work with the untrained horses.  Once they were all broken, his job was completed, and he would move on to the next outfit.  He worked his way across Texas and Oklahoma ending up in Denver sometime around 1906.

At this point, he turned in his saddle and spurs for a French knife and a chef’s hat.  Training under the old German chefs at the Brown Palace, he spent a number of years perfecting his new craft.  Once he earned the title of “chef,” he struck out on his own, opening the Pine Grove Café in downtown Denver.

Years later, at the Holland House in Golden, I asked him why he put up the arch.  He spoke of his travels as a cowboy and how miserable he felt when he’d come across people who were indifferent or rude when entering a new town or area.  To this day, he said, he would never go back to such a place because of the bad impression those uncaring folks made on him.  On the other hand, every place he went where he was welcomed in a friendly manner made him feel wonderful.  Somewhere along that road, he determined in his heart to make a special point of offering a friendly “Welcome” to any traveling strangers he would come across.  He called it the first part of “western hospitality.”

Once he had established himself in Golden and had become president of the Chamber of Commerce, he decided to do something to welcome all travelers and passersby to our town.  He wanted something that might inspire western hospitality among Goldenites and more importantly, give even the weariest of travelers the comfort of knowing that they were truly welcome in this place.

How could such a thing be accomplished?  Was there something that would actually work and be consistent in delivering the message?  The arch was his answer.  He could put a concise and simple message proclaiming to one and all that they are valuable and precious to us and we’re glad that they are here. 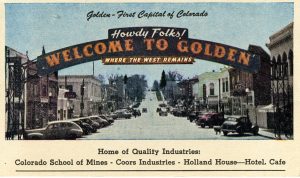 A c. 1949 postcard promoting the Golden Welcome Arch. This postcard was published by Lu Holland, president of the Golden Chamber of Commerce (1948-1950) and owner of the well-known Holland House. Holland was the driving force behind the development of the iconic arch. Golden History Museum & Park, City of Golden Collection.

That message, written in large letters spanning Washington Avenue said, “Welcome to Golden,” and underneath in smaller letters, “Where the West Remains.”  That slogan greeted travelers for about 30 years and was changed to “Where the West Lives” in the 1970s.

I don’t know if Golden realizes it, but it’s been given a great distinction above all other places.  It has been given the honor of being the “Seat of Western Hospitality.”