American Indians have for thousands of years made and continue to call the Golden area home. Like many cultural institutions around the nation and the world, Golden History Museum & Park is beginning to reckon with its own role in diminishing or erasing the American Indian presence. The institution has for the past more than 80 years focused nearly exclusively on collecting and telling the stories of the area’s White settlers. Not only has this practice been exclusive, it’s been historically inaccurate. It has ignored centuries of Indigenous settlement, habitation and cultural significance. It’s ignored the theft of lands, forced removal, and erasure of culture. And it has helped fuel a false narrative that the Golden area was somehow devoid of population prior to White arrival. 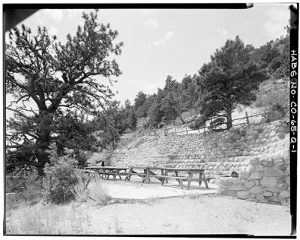 The 500-year-old Inspiration Tree, located at Rooney Road and West Alameda Parkway, in Morrison, Colorado. Alexander Rooney’s grandson Alex built a picnic area and dance pavilion beside the tree on the slope of Dinosaur Ridge, where the Ute Chief Colorow held councils in the late 1800s. Photo © Library of Congress Prints and Photographs Division, Washington, D.C.

In 2020, the museum began having conversations with cultural organizations and community partners to formulate a plan on how to develop the Museum’s own understanding of local Indigenous history and forge ties with tribal communities. What emerged was the concept of creating an American Indian ethnography of the region. An ethnography is a history of a people as told by those people in their own environment and steeped in traditional and folk knowledge. The Museum partnered with the City’s Historical Preservation Board and was awarded a grant from History Colorado to create the ethnography which we began in earnest in summer 2021.

Since starting this project, the Museum has received a significant amount of interest in the ethnography from citizens, cultural organizations, and other communities. People are curious about the work we are doing, the progress on the project, and what we intend to do with the material once completed. We thought it would be easiest to simply begin writing periodic updates on the project to share with interested parties. The following is a summary of progress made on the ethnography, new program opportunities, and educational resources.

Golden History Museum & Park engaged Anthropological Researchers LLC to research and write an American Indian Ethnography on the Cheyenne, Arapaho, and Ute tribes of the Golden Region. The report culminating from this study can be used to foster communication between the local government and American Indian tribes; be used in future preservation planning and historic interpretation for Golden; be built upon for future ethnographic research; and be integrated into larger planning processes. This project will involve the following tasks 1) a literature review; 2) ethnographic interviews review sessions with associated tribal communities; 3) production of a report summarizing the literature review and ethnographic interviews; 4) review of the report with tribal communities to ensure accuracy. The project will conclude in June 2022. The report is intended to lay the foundation for future American Indian programming and partnerships.

Anthropological Research LLC is a woman-owned small business with over 40 years of experience in providing professional services needed for ethnographic research with Native American tribes. The company is based in Tucson, Arizona, and works throughout the greater U.S. Southwest, including on several recent projects in Colorado with the Southern Ute Indian Tribe, the Ute Mountain Ute Tribe, and the Ute Indian Tribe of the Uintah and Ouray Reservation. The project team also has experience working with Native American tribes on several ethnographic projects located along the Colorado Front Range.

In 2020, Anthropological Research completed a multi-tribe ethnographic research study at Chimney Rock National Monument in southwest Colorado, which was awarded the 2020 State Historic Preservation Officer’s Award by History Colorado in recognition of the project’s contribution to the understanding of history and heritage in Colorado.

Ms. Maren P. Hopkins is the Majority Member and Director of Research for Anthropological Research, LLC. She has 21 years of experience in researching, directing, and managing a diverse array of ethnographic and archaeological projects in the Southwest and Mexico. Ms. Hopkins is an expert in place-based research, and her work largely focuses on traditional land use, including ethnobotany, traditional modes of travel, and ethnographic values for cultural and natural resources. Ms. Hopkins has authored and co-authored numerous technical reports, book chapters, and journal articles about archaeology, ethnography, and the relevance of collaboration in historic preservation research. Ms. Hopkins will serve as Project Manager and Ethnographic Researcher for this project.

Mr. Sean O’Meara is an ethnographer, ethnobotanist, and historian with over 14 years of professional experience in ethnographic and ethnobotanical surveys, traditional cultural property identification projects, oral histories, and archival research. He has worked with multiple Native American tribes on projects in New Mexico, Arizona, Colorado, and Nevada, including with the Cheyenne and Arapaho Tribes of Oklahoma, the Northern Cheyenne Tribe, the Northern Arapaho Tribe, the Southern Ute Indian Tribe, the Ute Mountain Ute Tribe, and the Ute Indian Tribe of the Uintah and Ouray Reservation. Mr. O’Meara will serve as an Ethnographic Researcher for the current project.

Anthropological Research staff participated in a kickoff meeting at the outset of this project on May 27, 2021. Sean O’Meara of Anthropological Research is taking the lead on contacting the Ute, Cheyenne, and Arapaho tribes involved in this study and coordinating with the Golden History Museum and Park staff. Mr. O’Meara made contact with all six tribes and each as expressed interest in working with the Golden ethnography. He has conducted preliminary calls with Northern Cheyenne, Cheyenne and Arapaho Tribes of Oklahoma, Ute Mountain Ute Tribe, and Northern Arapaho. Mr. O’Meara has other calls and interviews scheduled this winter. He is also gathering research, publications and other literature for review. Michael Spears is beginning to create tribal maps of the region that will focus on territory and landmarks of the Ute, Cheyenne and Arapaho.

Anthropological Research staff are beginning to lay out the report. Components of the report will include a general introduction to the project, methodology, and sources. The report will include an historical overview of the region and a description of the cultural landscape including geology, landforms, flora and fauna. A chapter will be dedicated to each of the three main cultural groups who lived in the region in the 19th century: Arapaho, Cheyenne, and Ute. Each chapter will include information about ethnic and political history, significant events, oral histories, and interpretations. The report will conclude with a summary with recommendations by tribes to the City and Museum for how to potentially use this information for future projects and how to maintain connections with tribes. 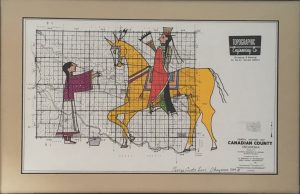 Undertaking the ethnography project has already opened doors with all kinds of potential new content partners. We were recently introduced to George Levi, a Southern Arapaho and Cheyenne artist and historian. Mr. Levi has provided the museum with a number of ideas and suggestions as to how the museum can incorporate Indigenous voices in museum content and programs. While many of those will manifest in the coming months and years, we are pleased to announce that the Golden History Museum will feature an exhibit of the work of George Levi in February-May 2022. Mr. Levi is a prolific artist and much of his work builds upon the Cheyenne tradition of ledger art—a visual tradition of storytelling on business ledgers printed in the 19th and 20th centuries.

Much of the preliminary phase of the Ethnography Project has been spent unearthing or identifying relevant existing resources on the matter. Museums, historical societies, governments, tribes, and schools have created materials and resources for teaching student and the public. The following are a handful of short films about American Indians in the Golden region.

Hubert Friday, great-great grandson of Arapaho leader William Friday, tells about his ancestor’s history and Arapaho life in Colorado. Friday was known to be a frequent visitor to the Golden area.

Jennee Hancock of Jefferson County Open Space tells the story of the Colorow Council Tree on the Hogback near Rooney Ranch. The Council Tree overlooks the valley to the east of the Hogback and was a favorite meeting place of the Ute Indians before white settlers entered the valley. After the Rooney family homesteaded the valley it became a meeting place between Colorow and other Utes and the newcomers. Later the Rooney family built a stone fireplace and brought guests to the site.