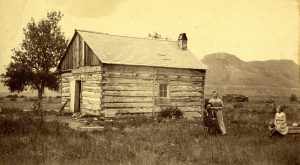 Jonas Wannemaker alongside his wife Elizabeth and one of their daughters outside of their first (or second) log cabin in Arapahoe City, about 1859-60.
Golden History Museum & Park, City of Golden Collection

Since these early mining settlements appeared virtually overnight, conflicts sometimes ensued between the “new” white settlers and native bands of Arapahoe Indians already inhabiting the land. Thomas Golden recounted the naming of the town in his 1859 account published in a Missouri newspaper: “We have laid out a town by the name of Arapahoe City after the aborigines.” 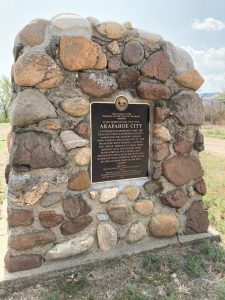 The town grew quickly. An advertisement in the April 1859 Rocky Mountain News publicized the Arapahoe Express which offered transportation to and from Denver every Monday and Saturday. Fox Diefendorf was the Assistant Marshal and there was even a post office. The first official census of the Colorado Territory from 1860 recorded 80 citizens living in Arapahoe City scattered throughout 21 “residences.”

The Wannemakers were one prominent and influential family to settle here from Wisconsin. Informally, referred to as the Mayor of Arapahoe, Jonas filed the first irrigation claim on Clear Creek in 1859 after hand digging an irrigation ditch still known as the Wannemaker Ditch. By 1863 the town and most of its inhabitants were gone. In the 1890s mining resumed periodically in the form of dredging and hydraulic mining. However, the area quickly evolved into an agricultural community known as Fairmount. In 1901, historian Jerome Smiley noted, “The rise and prosperity of Golden caused the decline and fall of Arapahoe.” Nothing remains today of Arapahoe City except for a small stone monument and a dedication plaque installed in 1946.

This article appeared in the October 2020 issue of the Golden Informer.