One of the things I love most about being a museum curator is you never know what you’ll encounter on any given day. Old collections hold so many fascinating stories—sometimes there are mysteries to be solved or unexpected discoveries waiting to be found. When I started my new job as curator on November 1, 2022, I had no idea that it would involve a booby trap and a visit from the bomb squad. But, before we get to that, a little back story is in order. 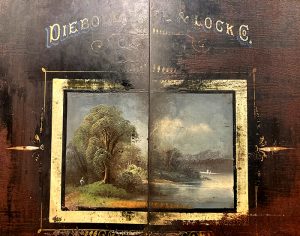 In May 2021, then-curator Mark Dodge had the daunting task of moving a 3,800-pound, 120-year-old Diebold safe donated from Golden’s Creekside Jewelers to the Golden History Museum. While the move was a mere four city blocks, it was no easy feat. With the help of the Golden Streets Department, the safe was rolled down the street on a forklift, and after much huffing, puffing, and brute force, it was “safely” (pun intended) installed into the main gallery of the Museum.

Fast forward to 2022—upon closer inspection of the safe, Mark noticed a small metal fixture, roughly 8 inches tall, 2 inches wide, and 1.5 inches deep that was screwed to the back of one of the doors, directly behind the dial. This curious, after-market device was labeled “Badger Safe Protector Co., Patd. Madison Wis.” Also known as “The Silent Watchman,” this safe protector does not look like much at first glance, but a little research yielded some very interesting, yet disturbing, results. Designed for burglars who strike or drill into the safe’s dial, the metal casing houses two glass vials filled with a clear, yellow-tinged liquid. If these vials break, tear gas is released, incapacitating the would-be burglar. Mark had just begun researching the protector right before he left his position and, due to wrapping up nearly 18 years of work here, was not able to see it through. Furthermore, as the safe is over 100 years old and no incident had occurred yet, it seemed as though all was copacetic.

Now the question for me was, is the tear gas still inside this thing? What noxious, 100-year-old chemical could reside within? Further research yielded even more alarming results. First, I found that the chemical most commonly used in Badger Safe Protectors was chloropicrin, a common WWI-era tear gas. Second, and perhaps more frightening, some sources suggested that over time chloropicrin could deteriorate into nitroglycerin! So now, not only could we potentially have a toxic gas on our hands, but it could also be highly explosive. Luckily, the Centers for Disease Control website clarified that while chloropicrin does not degrade into nitroglycerin, it can combust at temperatures higher than 234 degrees Fahrenheit. Still dangerous, but at least not imminently so.

Unfortunately, due to its metal housing, it was not possible to see if the glass vials were: a) still present, and b) still filled with chemicals. The only way to figure that out would be to remove the protector from the safe. On the surface, it looked as though the protector was affixed to the door with just two simple screws, but nonetheless I wanted to be cautious in case the vials were still intact. I was not about to carelessly whip out a screwdriver without PPE (personal protective equipment) for myself, and most certainly would not do anything on a day when we were open to the public.

On a quiet Monday when the museum was closed, I started by calling the fire department to see if they could dispose of the tear gas. Having never seen anything like the Badger Safe Protector, they were not sure what to do and suggested I call the police. The police, equally astonished, decided to call the bomb squad. The bomb squad, having never encountered this situation before, advised us to err on the side of caution and move the safe to a contained space just in case the vials were still dangerous, until an officer could come and carefully remove the device. The bomb squad did some research and decided to send a sergeant, equipped with a gas mask, to the museum to dismantle the protector.

It took four police officers using all their might to move the safe into the nearest office at the museum, which happened to be my office, and the collections room. Then, once we closed the office door, Sergeant Guess donned his gas mask and PPE, and with a slot screwdriver, carefully unscrewed the safe protector. Nothing happened, thankfully.

To our amazement, after a century of use, and after jostling its way down Washington Avenue as the safe moved from the Post Office to Creekside Jewelers, and finally to the Museum, two glass vials of liquid tear gas remained intact inside the protector. True to form, the vials contained a light yellow, slightly viscous liquid, which is how chloropicrin commonly appears.

Officer Page and Sergeant Guess carefully packaged the safe protector and vials in bubble wrap and took them to be properly disposed of by the bomb squad. As the Badger Safe Protector is interesting on its own, but is also part of our Diebold safe’s history, we asked the bomb squad to retain the housing and return it (if possible) to the Golden History Museum so we can continue to tell this fascinating story. As I get further into my new job, I look forward to other exciting collections findings—though, hopefully no more that contain dangerous compounds!