A number of candy companies have called Colorado home over the years. There was Brecht Candy Company (long-gone), and the likes of Hammond’s and Enstrom Candies that still satisfy folks today. But the most famous has to be Jolly Rancher Candies, even though it’s no longer made here in Golden, Colorado.

Dorothy and Bill Harmsen moved to Colorado from Minnesota in 1942. Bill was a pilot for Continental Airlines, but he dreamed of owning his own business. The couple bought the old Johnston farm in Wheat Ridge, Colorado, about six miles east of Golden. Dorothy entered the fruit and flower business, growing gladiolas, peonies, raspberries, and strawberries, which she delivered to Denver. Later, the Harmsens also set up a woodworking shop in their barn, where they made doll beds and cocktail trays. And then they tried their hand at ice cream.

It all started in Golden 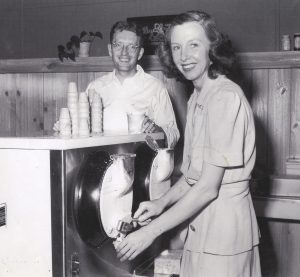 Dorothy and Bill Harmsen opened their first Jolly Rancher Ice Cream Store in Golden, Colorado, on May 28, 1949. The retail ice cream store was located under the “Howdy Folks” arch on Washington Avenue. They chose the name Jolly Rancher because Rancher gave the store a western aura and Jolly suggested a friendly atmosphere. After the first summer, the couple had more liabilities than assets. Rainy weather and insufficient ice cream manufacturing equipment haunted the enterprise. In order to get through the upcoming winter months, they added a line of bulk and boxed chocolates, which initially came from a small candy firm in Denver.

This proved a perfect combination as business prospered, and soon they even opened a number of franchises in Colorado, Wyoming, and Nebraska. The original Golden store was sold in 1951, but the Harmsens were still supplying chocolates to their franchises. Candy sales exceeded their expectations and soon outgrew supply. At the same time requests for their five-cent hot cinnamon taffy stick, better known today as Fire Stix (the recipe was developed by the Harmsens while in Golden) became so numerous they realized a new opportunity. 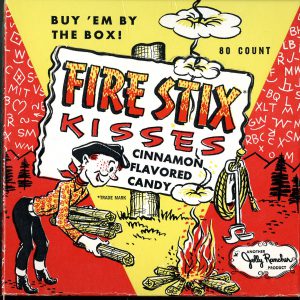 They pulled out old horse stalls in their big barn and within several months set up a full-scale candy manufacturing operation. A candy maker was hired and they rechristened their home Sugar Bar Ranch. With this company motto, the company prospered: Jolly Rancher is the only candy guaranteed to be positively superior to any other you have ever eaten!

Over the years, the Jolly Rancher plant went through numerous remodels and expansions, until it was a full-fledged plant. In 1966, Jolly Rancher merged with Beatrice Foods Company of Chicago. At the time of the merger, the plant was operating two shifts with about 250 employees. Production was nearly 125,000 pounds of candy per day! Leaf Brands purchased Beatrice Foods in 1983, which was subsequently bought by the Hershey Company in 1997. The Wheat Ridge production plant at 5060 Ward Road closed for good in 2002. The candies are now manufactured in Canada.