The backstory on Lazy Squaw Ranch

Home » Collections and Exhibits » The backstory on Lazy Squaw Ranch

Bill and Dorothy Harmsen named their mountain retreat Lazy Squaw and used the name in some of their early candy marketing. Following is Dorothy’s original article about the ranch which ran in the August 1964 issue of Sugar ‘N Spice. 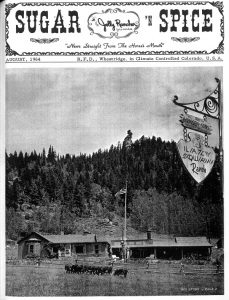 The Lazy Squaw Ranch has been the mountain retreat of the Harmsen family for ten years. It is located at an altitude of 9,300 feet, between Blackhawk and Rollinsville, Colorado, on the Gap Road. The ranch house is on the west 150-acre meadow, which is part of a 2000-acre composite of four old ranches 35 miles from Denver, overlooking Denver and the Continental Divide from many scenic spots. The road in front of the house was pounded out of the mountain side by the small shoes of oxen which pulled wagons loaded with coal from Leyden to Central City. An old blacksmith shop, across the road from the barn, is still there to tell the story of hardship and fortitude of the early settlers of Colorado.

The house had been deserted for four years when the Harmsens bought it. Had it stood unoccupied another year, it would not have been worth reclaiming. It was doubtful at that time, as not a single piece of glass remained in the decrepit structure. The birds had nested in the old walls for so long, they were reluctant occupants to be evicted. For several years the birds returned to fly against the windows, trying to get in to make their home again in the security of the old house.

Winds and rain had taken their toll, as the water coming down the mountain washed out the floor and wall of one corner of what is now the living room. This obviously was just the spot to build the fireplace. Much of the original house and barn was saved and restored. The abundant water supply which comes from a spring near the house was captured in a well house, with a small tack room above in Swiss Chalet style. The complete re-do of the house, barn, and corrals is yet to be finished, and probably never will be, as there is always something to be added that wasn’t originally planned for. 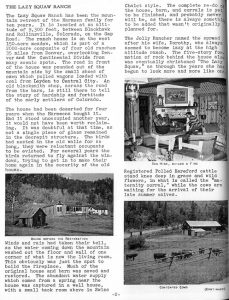 The Jolly Rancher (Bill Harmsen) named the spread after his wife, Dorothy, who always seemed to become lazy at the high altitude ranch. The five-story formation of rock behind the house also was eventually christened “The Lazy Squaw,” as through the years she has begun to look more and more like one.

Registered Polled Hereford cattle stand knee deep in grass and wild flowers, in what is called the “maternity corral,” while the cows are waiting for the arrival of their late summer calves.

At this 9,300 ft. altitude, without warning, the sun can be obscured and the whole area in front of the house enclosed in churning clouds, giving a pleasant feeling of being at the mercy of Mother Nature. When the wind is blowing up a storm, one sometimes wonders if the Lazy Squaw Rock, perched so precariously on top of the mountain, will stand her ground where she has stood for many years, to become a landmark and tourist attraction, which can be seen for miles around.

According to Malcolm Stevenson, who wrote, In the High Country: Settlers on the Land at Golden Gate Canyon State Park, the Harmsens renamed their property in later years, calling it the Harmsen Ranch. A decision they made with awareness of changing opinions around the word “squaw”. John Harmsen, Bill and Dorothy’s grandson tells me he still owns the original Lazy Squaw sign.

The Harmsens owned the property for nearly 25 years, buying up additonal tracts of land when they became available. In 1978 they sold it all to the State of Colorado to be added to Golden Gate Canyon State Park.