Bittersweet: Confronting the Complicated Past of the “Lazy Squaw Chocolate”

Home » Collections and Exhibits » Culinary History » Bittersweet: Confronting the Complicated Past of the “Lazy Squaw Chocolate” 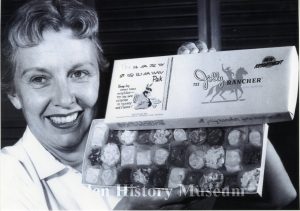 The words we choose to use say a lot about who we are, what we believe, and the time we live in.

For words that are associated with race and gender, they can also become complicated and painful reminders of America’s difficult relationship between majority and minority groups. The word “squaw,” for example, is a word with such a complex and debated past that it is hard to find consensus on where the word began, or what it actually means. Many trace the origin of the word to the Algonquin term for woman. Others trace it back to the Iroquois, with a similarly gendered meaning. The first recorded use of the word was by European colonizers who used the word as a way to define the gender and race of people and objects.

Eventually, the word developed a connotation of racial inferiority, as well as gendered inferiority. “Squaw” would be a term applied in a similar way as “slut,” “tramp,” “bitch,” or even more dramatic and inflammatory terms. Because of this, in the 1990s some Native American activists began organizing public campaigns to get rid of the word from public places as they argued it was too offensive to be used at all.

Yet, in other parts of the country, the term was used for entirely different purposes. Some used it as a generic term for Native women, and some native communities embraced the word as a unifying force. Still today, “Squaw Dances” are practiced in a ritual among the Cherokee tribes. 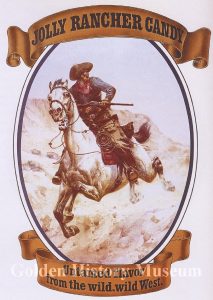 When the Harmsen family, owners of the Jolly Rancher Company, developed a new box of chocolates, they called it “Lazy Squaw Chocolate.” This originates from the name of their family ranch, just up the road near Golden “Lazy Squaw Ranch.” The ranch itself was named for a distinctive rock formation that appeared like a sleeping person. The Harmsens decided to use their ranch name as a branding tool. In choosing the brand, “Lazy Squaw,” we know that the Harmsens were trying to evoke an image of a native person. This is shown both by the graphics on the candy itself (of a napping man in a headdress), and because it is in line with their western theme. The “Jolly Rancher” company built their brand by using images of the Wild West, cowboys, and Indians. This play on nostalgic western tropes was a very common phenomenon in the 1950s when the Harmsens started their business. But the Harmsens took the imagery a step further, by portraying the stereotype of a “lazy” indigenous woman, which is a stark contrast to their active and “jolly” rancher.

The Harmsens are not unique in using this controversial term in marketing, or as the name of a geographic place. Yet, as a museum in 2019, displaying the word in a gallery is fraught with complicated questions. Is it acceptable to display a racial slur in a family-friendly museum? Is it acceptable to ignore this part of the Harmsen family business, and not address it? Should the Harmsens be held responsible for choosing what we now see as a racial stereotype to market candy? Or should they be given a break because of the time period they lived in? Does their use of this word along with a stereotypical image change the way you view the brand?

What do you think? We want to know!