The War to End all Wars closed this week 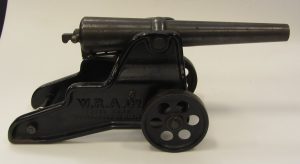 The canon that fired the shot that was heard around Golden.

The War to End all Wars closed this week. I hope you saw the Winchester signal canon used in Golden to celebrate both the end of World War I and World War II. Thank you to Golden resident Dan Mayo for loaning this one-of-a-kind Golden treasure. This was the first time it’s ever been displayed. 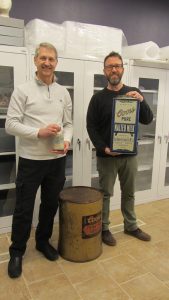 Showing off a few of the great loans with Bob Matson in the History Lab.

Late last year I started researching Golden culinary history and food traditions. Over the course of the next couple of years, I plan to write up my discoveries here. Additionally, watch for a series of food-themed exhibits through 2019-2020. The first in this series of exhibits is titled, Milking an Opportunity. Opening April 11, 2019, this new display unpacks the origins of Coors malted milk and explains how Coors got in the game and ultimately became the largest manufacture of the stuff during Prohibition.